Click on the arrow to play, or choose your streaming service below.

During a recent stay in Paris, the band were feeling down after the dramatic last minute cancellation of a recital we were scheduled to deliver at the Conservatoire, owing to Gene Poole-Skimmings utterly trashing the dressing room when the local staff were unable to provide the packet of Jammy Dodgers he had requested.

Nobody was feeling more down than Aldo Sachs. We took the Metro back from the Conservatoire and returning to his old stomping ground, where once he had played saxophone for small change, brought some bitter memories flooding back. It all came to a head at Saint Germain des Prés. This was the station where, for many years, he had watched as the love of his life walked by him twice a day on her way to the flower stand where she worked. Too shy to put his feelings into words, he had hoped that the extra passion he put into his playing as she passed would make his sentiments clear and elicit a response. Alas it never did, and now, years later, the sight of the flower stand brought it all back. It was too much for poor Aldo, and he burst into tears. 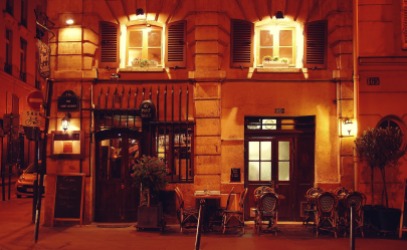 We retired to a small bistro round the corner, where, having our instruments with us from the aborted Conservatoire performance (Gene has a folding piano, which he is hoping to patent some day), we began to play, and in response to Aldo’s angoisse, this song just kind of took shape through the smoky haze of the patrons’ Gauloises. A four man recording team from a local studio happened to be sitting at the next table with all their gear and captured the performance for posterity.

You can also listen at SoundCloud.